Have you signed this? If not, act now to safeguard the UN from Conflicts of Interest: July 10-11 2014 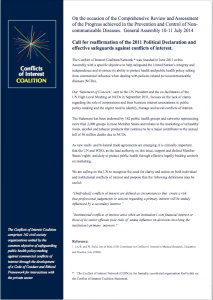 Please ask health, human rights or development organisations to endorse the statement calling for effective safeguards against conflicts of interest. Large for-profit corporations and their front groups will be attending the Comprehensive Review and Assessment of the Progress achieved in the Prevention and Control of Non-communicable Diseases.  General Assembly, New York City, 10-11 July 2014 We are calling for clarity and for effective safeguards that will ensure that they are not allowed to influence the policies of the United Nations. If your organisation can endorse this statement send an email with your NAME, TITLE and SCANNED SIGNATURE  to:   Bill Jeffery, Centre for Science in the Public Interest: bjeffery@cspinet.org CSPI link here: http://www.cspinet.org/canada/foodstrategies.html Great if you can send a copy to me: prundall@babymilkaction.org Useful links
1. The most recent version of the NGO-joint statement:  http://cspinet.org/canada/pdf/conflict-of-interest-safeguards_health-trump-trade.july2014.pdf
2. The most recent draft of the 2014 official political declaration of the United Nation is available here: http://www.who.int/nmh/events/2014/outcome-document.pdf?ua=1
3. Meeting details: http://www.un.org/en/ga/president/68/events/hlm_ncd.shtml
4. The meetings will be webcast July 10-11, 2014 at: http://webtv.un.org/
5. List of High Level Meeting political declarations since 1946:   http://www.un.org/Depts/dhl/resguide/resins.htm
5. The joint statement of NGOs and periodically updated list of  signatories is available at:  http://cspinet.org/canada/pdf/conflict-of-interest-safeguards_health-trump-trade.july2014.pdf Background In September 2011, governments  gathered at the United Nations headquarters in New York City to unanimously agree to a Political Declaration on the Prevention and Control of  Non-communicable Diseases.  This was the second UN declaration to focus on a health issue since World War II (the other focused on HIV-AIDS in 2001).    Out of concern for the lack of attention to conflicts of interest and the way corporations were inappropriately influencing the proceedings, a Conflict of Interest Coalition was formed. It had a very specific objective:  to call on  the United Nations General Assembly to bring in effective safeguards to protect public health policy setting from commercial interests.  Our 2011 Statement was rapidly endorsed by 162 NGOs and networks, representing over 2000 NGOs.    Government leaders will gather again in NYC on July 10-11, 2014 to take stock of progress. Supporters of the Coalition will be attending the meeting and will  raise the same concerns:  COIC/COIN 2014 Statement   CLICK HERE for background papers on the WHO website. The Public Private Partnership approach follows the vision for future global governance outlined in the World Economic Forum’s Global Redesign Initiative (WEF-GRI). As outlined in the NGO letter on ICN2 - according to the WEF’s key global public issues can be removed from UN agencies’ agendas whenever they risk resulting in policies or regulations ‘unfriendly’ to profit maximisation. “Stakeholderisation” blunts necessary political conflicts, brings TNCs in as the indispensable ‘stakeholder’ in any policy-making arena. This risks a loss of democratic principles, diverts attention from the role of corporations in causing malnutrition, in all of its forms, and the urgent need for regulation. The COI  statement was used in Informal interactive hearing with NGOs, civil society organizations, the private sector and academia on the prevention and control of non-communicable diseases on the 16th June.  http://www.babymilkaction.org/archives/926 If you would like to join the Conflict of Interest Network please contact me for the Terms of Reference.

`TEXT of the Statement
*    The Conflict of Interest Network (COIN) is the formally constituted organisation that builds on  the Conflict of Interest Coalition Statement.
On the occasion of the Comprehensive Review and Assessment of the Progress achieved in the Prevention and Control of Non-communicable Diseases.  General Assembly 10-11 July 2014 Call for reaffirmation of the 2011 Political Declaration and effective safeguards against conflicts of interest.

The Conflict of Interest Coalition/Network * was founded in June 2011 at this Assembly with a specific objective to help safeguard the United Nation’s integrity and independence and to ensure its ability to protect health and public health policy setting from commercial influence when dealing with policies related to noncommunicable diseases (NCDs).
Our ‘Statement of Concern’, sent to the UN President and the co-facilitators of the UN High Level Meeting on NCDs in September 2011, focuses on the lack of clarity regarding the role of corporations and their business interest associations in public policy-making and the urgent need to identify, manage and avoid conflicts of interest.
The Statement has been endorsed by 162 public health groups and networks representing more than 2,000 groups in most Member States and relates to the marketing of unhealthy foods, alcohol and tobacco products that continue to be a major contributor to the annual toll of 36 million deaths due to NCDs.
As new multi- and bi-lateral trade agreements are emerging, it is critically important that the UN and WHO, as the lead authority on this issue, support and defend Member States’ rights  and duty to protect public health through effective legally-binding controls on marketing.
We are calling on the UN to recognize the need for clarity and action on both individual and institutional conflicts of interest and propose that the following definitions may be useful:
“[Individual] conflicts of interest are defined as circumstances that  create a risk that professional judgements or actions regarding a primary interest will be unduly influenced by a secondary interest.”
“Institutional conflicts of interest arise when an institution’s own financial interest or those of its senior officials pose risks of  undue influence on decisions involving the institution’s primary  interests.” 1
Reference:
1  Lo, B. and M. Field, Inst of Med. (US) Committee on Conflict of  Interest in Medical Research, Education and Practice, Eds. (2009).

NGOs criticise WHO's 'non paper' on conflicts of interest

NGOs criticise WHO's  'non paper' on conflicts of interest

22.10.2015 For the past 4 years and as part of the WHO reform, WHO and its governing bodies are discussing new set of policies, currently called Framework of Engagement With Non State Actors (FENSA). This is a critically important document as its final shape will determine whether WHO will be an agency able to protect its independence, integrity and credibility. The International Baby Food Action Network (IBFAN),  Third World Network (TWN) and other Public-interest NGOs  and networks have been closely following the process. Negotiations have taking place in Geneva this week and tomorrow - Friday 23rd October -  Member States will discuss  a new problematic document - referred to as a  NonPaper [1]   that has been prepared by WHO's Secretariat.  This paper lists supposed  risks of implementing FENSA and suggests that it would have “detrimental consequences on the work of WHO.”  In response to the "non-paper''  66 NGOs  working in health, right to food and nutrition or human rights have written to Dr Chan, Director General of WHO,  calling on her to protect the UN and overall policy-making from corporate takeover.  CLICK HERE:   NGOtoChan_22.10.15 (2). The NGOs express concern that the "non-paper'' is an attempt by the Secretariat to prevent the further strengthening of  FENSA that would allow it to become a much-needed  robust framework that would insulate WHO from corporate capture and other undue influences.  Currently WHO does not have transparent effective policies and tools to prevent such undue influences. The "non-paper'' lists  potential ‘unintended consequences’ often in an exaggerated manner, as assumptions, without providing any empirical evidence to back up these claims.

The letter reminds Dr Chan of her statementat the Regional Committee of Europe on 15 September 2015 in which she said : “The new distribution of power raises an absolutely critical question for health in the sustainable development era. Who really governs the policies that shape our health? Is it democratically elected officials acting in the public interest? Is it multinational corporations acting in their own interest? Or is it both? That is, governments making policies that are heavily influenced by corporate lobbies.”
1   Implication of Implementing the Framework of Engagement with Non State Actors - Non Paper  prepared by the WHO Secretariatfor consideration by the informal meeting of Member States on 19-23 October.

We, the undersigned, are from public-interest civil society networks and organizations who stand for a strong, independent World Health Organization (WHO) that does its work with integrity and deserves the trust of global citizens.

We write to express our concern about the “non-paper” titled “Implications of Implementing Framework of Engagement with Non-state Actors” that was issued by the Secretariat on 14 October 2015. WHO Members States initiated the development of the Framework of Engagement with Non-State Actors (FENSA) to safeguard the independence, integrity and credibility of the WHO when engaging with ‘non-state actors’ (NSAs).

FENSA was to provide a robust framework for engagement with NSAs to ensure the protection of the Organization from undue influence especially in its norms and standard setting functions. The non-paper prepared by the Secretariat, portrays the implementation of FENSA as having “detrimental consequences on the work of WHO”, provides no constructive contribution to the new Member State-led process. We question the motives behind such a paper as it comes in the middle of negotiations. It is purported prepared on the basis of a decision of the World Health Assembly (WHA). Yet, we do not find any such decision reflected in the WHA resolutions or the list of decisions. We are very concerned that the paper by the Secretariat can undermine further strengthening of a FENSA and prevent it becoming a truly robust framework, as the paper lists the potential ‘unintended consequences’ often in an exaggerated manner, as assumptions, without providing any empirical evidence to back up these claims. A robust framework is essential to protect the integrity, independence and credibility of WHO as it carries out its essential norm-setting tasks. We refer here to your address at the Regional Committee of Europe on 15 September 2015, in which you stated: “The new distribution of power raises an absolutely critical question for health in the sustainable development era. Who really governs the policies that shape our health? Is it democratically elected officials acting in the public interest? Is it multinational corporations acting in their own interest? Or is it both? That is, governments making policies that are heavily influenced by corporate lobbies.”[1] While fully agreeing with your concern, we would like to point out that it is high time to take measures in the Organization to insulate WHO from corporate capture and other undue influences. It will be a step in the right direction if the final framework contains effective provisions for identifying risks of undue corporate influence, including conflicts of interest, and measures to avoid and when not possible, manage, such risks in a transparent and effective manner. Moreover, currently, WHO does not have transparent and effective policies and tools to prevent such undue influences and risks. As you are aware, the Organization lacks a comprehensive conflicts of interest policy within which the existing tools could be implemented, and new ones identified and developed, including capacity building for WHO staff. Therefore, it is very disconcerting that the FENSA provisions on conflicts of interest contain conceptual errors, despite repeated attempts by public interest advocates to highlight these in the governing body debates and in NGO statements. It is urgent to fix those errors. We call upon you to ensure that your Secretariat supports a constructive finalization of a FENSA that includes robust provisions to prevent undue influence from the private corporate sector, including corporate philanthropy foundations, and that the secondary interest of WHO to secure funding does not collide with the WHO constitutional mandate, a conflict of interest that global public health cannot afford. We thus kindly ask you to ensure that the Secretariat act in good faith and protect the independence, integrity and credibility of WHO. We stand ready to support your efforts in that direction.   [1] http://www.who.int/dg/speeches/2015/europe-regional-committee/en/
Endorsers   (this list is being updated regularly)

Posted by Patti Rundall at 7:35 AM 7 comments 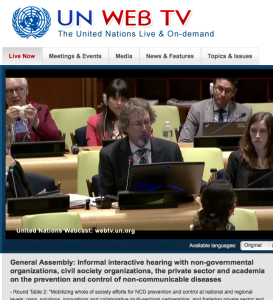 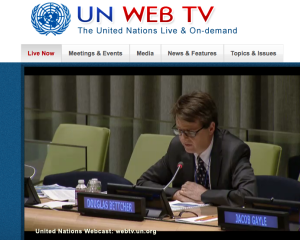 Thanks to  Bill Jeffrey of Centre for Science in the Public Interest  for delivering part of our statement on behalf of the Conflict of Interest Coalition/Network at the General Assembly.  COIC 161.June 2014 v2

The  afternoon session on partnerships can be seen on this link
http://webtv.un.org/live-now/watch/general-assembly-informal-interactive-hearing-with-non-governmental-organizations-civil-society-organizations-the-private-sector-and-academia-on-the-prevention-and-control-of-non-communicable-diseases/1667942224001/

To add your organisation’s support to the COI Coalition statement (full list below), please email prundall@babymilkaction.org

Members of the COI Coalition.